Two local Dads from Dumfries have smashed their National 3 Peaks Challenge To Raise Over £2,500 for Include Us 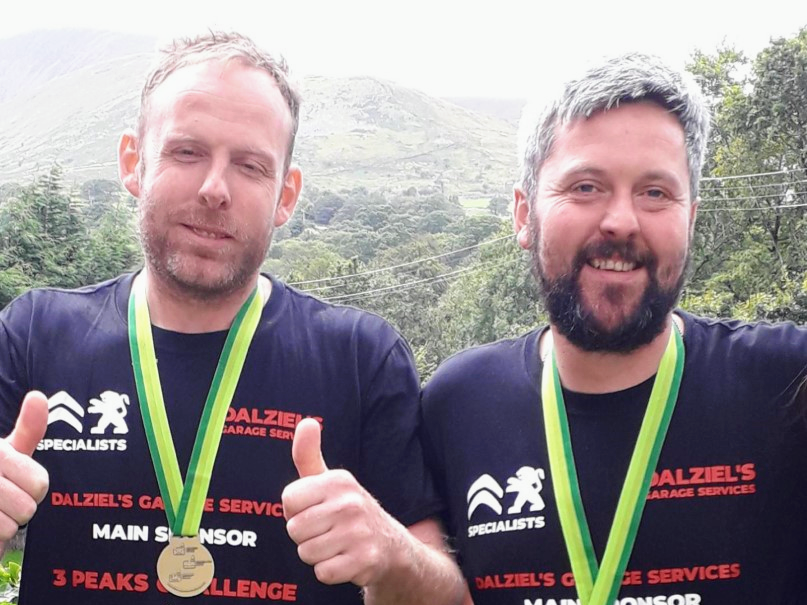 JP McLuskie and Paul Crawford undertook the 3 Peaks Challenge over less than 24 hours to raise money to make Catherine Street Play Park more inclusive and accessible. The challenge was tough and difficult but the guys did it in 22 hours and 45 minutes despite the losing their way in the dark during the descent of Scafell Pike. So far they have raised over £2500 for the Include Us.

JP said “We were feeling really confident about the Scafell Pike climb because it was the one climb we had practiced. But doing the climb in the middle of the night, in pitch darkness was really difficult. It took us longer than we anticipated to get down and by that time we were wet, tired and despondent. Time was against us and we thought that was it…. that we wouldn’t be able to complete the challenge. But we made time up on the drive down to Wales and gained a valuable 35 minutes. We were felt a bit wobbly by the time we started to climb Snowdon but managed to get to the top in 1 hour 38 minutes which gave us a bit of a boost. Getting back down off the mountain was a fantastic feeling….we’d done it and looked forward to a very well deserved pint and a burger!!

Dr Andy Zieleniec, Chair of Include Us said: “We all followed the lads progress throughout the 24 hours, posting updates on our Facebook page but we were worried for them when they didn’t manage down Scafell Pike when we expected. No-one got much sleep that night till we got the news that they were safe and well. The fact that they were able to go on and smash the target of completing the challenge in under 23 hours is just remarkable. We have much to thank them for”

Although the 3 Peaks Challenge is over, people can still donate to the park by visiting our Facebook page ‘Include Us at Catherine Street’

The Park Has Been Shortlisted In The Landscape Institute Awards

Two local Dads from Dumfries have smashed their National 3 Peaks Challenge To Raise Over £2,500 for Include Us

Hello from the Include Us team! I’m sure it has been a busy old month for you all getting ready for Christmas. Does it seem to come around quicker every year – hohoho? Despite being rained off for our Christmas event this year the park is looking lovely after our little Xmas Elves have been busy with the tinsel!